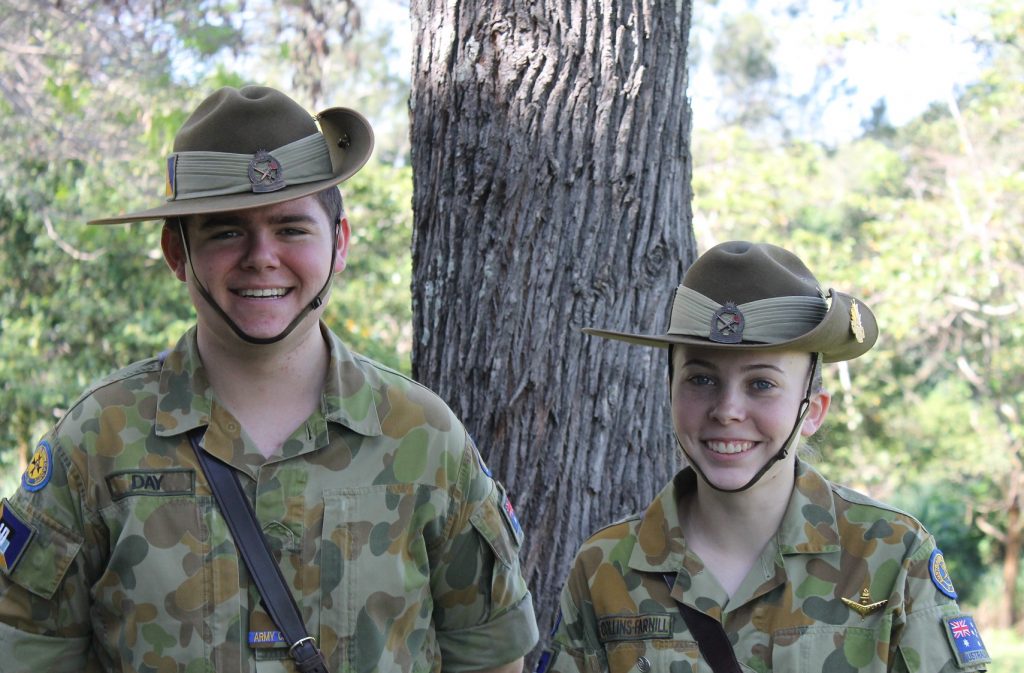 The Cadet unit at St Paul’s has a long history. Over the years many students have participated in the program and continued their involvement within the Australian Army beyond St Paul’s. Cadets is a great opportunity for students to extend themselves beyond their self-imposed limits, develop an understanding of freedom and choice, develop skills such as teamwork and leadership and grow in self-confidence.

Two St Paul’s students who have pursued their passions and remained actively involved in Cadets are Lachlan Day (Class of 2015) and Tamsyn Collins-Farnill (Class of 2015).

They recently provided us with an update on their acheivements, and we have published this on our website. You can read more here:

Tamsyn and Lachlan both joined Cadets at St Paul’s School Army Cadet Unit. Tamsyn joined Cadets in 2010 when she was 12, and Lachlan joined in 2013 when he was 15. Considering they joined at such a young age, they have both accomplished so much at both a Unit level and Battalion level. In addition to accomplishments, there is also a big responsibility that is required at a Battalion level. The progression within cadets requires determination and commitment, as well as the core values of: ‘Courage, Initiative, Teamwork and Respect’. Tamsyn and Lachlan have shown all these components which is why they have been appointed such a prestigious position at a Battalion level, and the path they have both taken has shown the components required to achieve such a position.

Within the St Paul’s Army Cadet Unit, Tamsyn achieved many positions and awards. Positions consisting of: ‘Cadet Quartermaster’ and ‘SPS Cadet Company Commander’. As well as awards consisting of: ‘Most Outstanding First Year Cadet’, ‘Most Outstanding Junior Non-commissioned Officer’ (JNCO) and the units ‘Cadet Training Officer Award’. Tamsyn graduated both St Paul’s School and the St Paul’s Cadet Unit in 2015 as a ‘Cadet Under Officer’ (CUO).

Tamsyn recommenced Cadets in 2016, being considered for and then appointed, 10 Battalion CUO (10BN CUO) within South Queensland (SQLD) Brigade. Throughout 2016, as Tamsyn was now overseeing 8 Army Cadet Units within the SQLD Brigade, it was part of her responsibility to mentor and oversee the training, conduct, activities and many more elements within all of these units.

In addition to her Battalion responsibilities, Tamsyn also participated in the ‘National Adventure Training Award’ where she participated in a number of adventurous activities in Singleton, NSW. Later in 2016 a ‘Cadet Training Team’ was started in order to build and develop both leadership and instructional skills and then pass these different levels of skills onto the new and incoming ‘Cadet Recruits’. Starting the current year of 2017, Tamsyn moved into a different role and rank within the Battalion, being appointed ‘10 Battalion Cadet Regimental Sergeant Major’ as a ‘Cadet Warrant Officer Class 1’ (CDTWO1). Throughout both years of 2016 and 2017, Tamsyn had the support of Lachlan, who helped and learnt from her skills, as well as sharing and developing the same Cadet culture as Tamsyn.

Lachlan has also developed a path of his own and has stepped out of his comfort zone to become a strong Cadet team leader alongside Tamsyn. This has benefitted both Lachlan and Tamsyn and the Cadets they oversee respectively.

Within St Paul’s Army Cadet Unit, Lachlan has also received positions and awards. Positions consisting of: ‘Cadet Quartermaster’ and ‘Section Commander’, as well as awards consisting of: ‘Most Outstanding First Year Cadet’ and ‘Most Outstanding JNCO’. Lachlan also graduated St Paul’s School and St Pauls Cadet Unit in 2015, holding the rank of ‘Cadet Corporal’. Commencing the year of 2016, Lachlan relocated to a new unit in Murrumba Downs; ‘126 Army Cadet Unit’ (126ACU). Upon joining 126 and recently attending a leadership course, Lachlan was promoted to a ‘Cadet Sergeant’ (CDTSGT). Throughout the year of 2016, he was appointed ‘Company Sergeant Major’ (CSM) of 126ACU as well as assisting in the organisation of the ‘Cadet Training Team’. Moving into the current year, 2017, Lachlan attended another Leadership Course which provided him will the knowledge and skills of how to be a ‘Cadet Warrant Officer’ (CDTWO) or ‘CUO’. Lachlan was then promoted to a ‘Cadet Warrant Officer Class 2’ (CDTWO2) still holding the position of ‘126 CSM’ and continuing the assistance with the ‘Cadet Training Team’. In August this year, Lachlan was further promoted to a ‘CUO’ commencing a new appointment of ‘126 Cadet Company Commander’, as well as being considered for the position that Tamsyn had held in 2016; ‘10BN CUO’. Lachlan was accepted for the position of ‘10BN CUO’, now holding two appointments; ‘126 Company Commander’ and ‘10BN CUO’.

In Summary, Tamsyn and Lachlan have both been strong leaders from the moment they joined the St Paul’s School Army Cadet Unit and have accomplished great things in many units within ‘10BN’. They are now both and organising and running the ‘10BN Cadet Training Team’, and the cadet leaders of 10 Battalion and known to Cadets as: 10BN CUO Lachlan Day and 10BN CDTRSM Tamsyn Collins-Farnill.