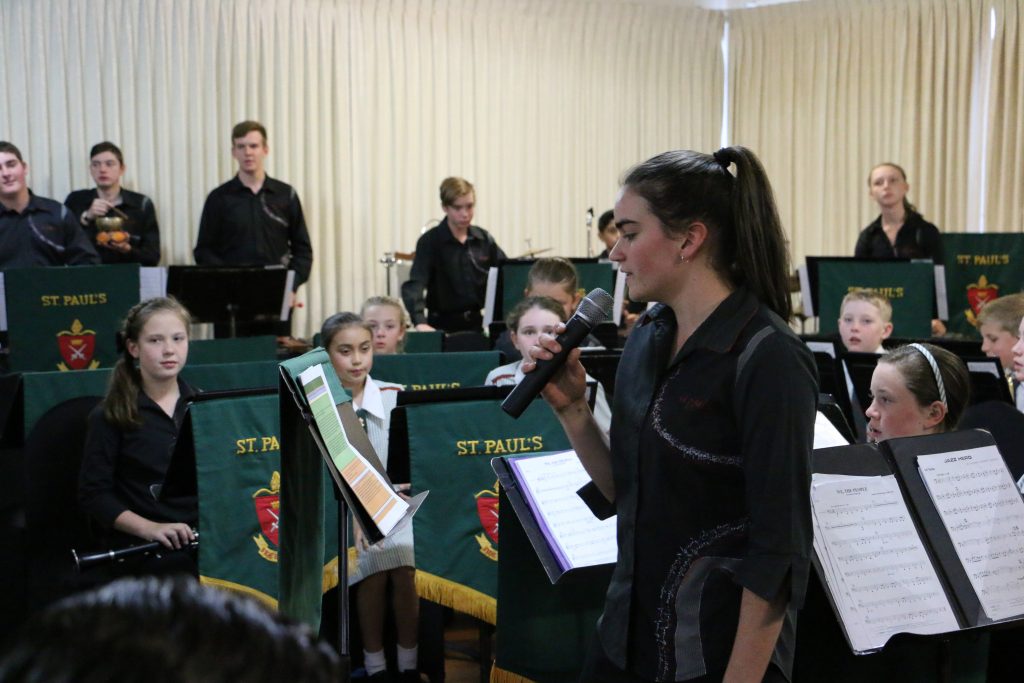 The annual Concert Band & Jazz Dinner was held last Saturday night (27 August) at the Tavernetta (at Carseldine).     The afternoon started with the newly-formed Percussion Ensemble performing a minimalist inspired work by Brisbane composer, John Parker.   The three large concert bands then entertained the packed room with selections of classical and popular works.     Thanks to Dr Browning who fulfilled his dream, dressed in the complete official band uniform, of joining the percussion section in one of Concert Band’s pieces!         The jazz dinner was a huge success with parents and friends enjoying a 3-course meal while the four jazz ensembles entertained the crowd.     Congratulations to all musicians that performed at this fantastic event.

The last music event for this term is the Junior Ensembles Concert on Sunday 11 September.   Year 2 Strings, Andante Strings, Red Shirt Choir, Junior School Choir, Jazz Ensemble, Junior Wind Band and the Year 4 Concert Band will all perform at the Kittyhawk Room at the Kedron-Wavell Services Club.     This will be a lovely afternoon of music starting at 4pm on Sunday 11 September, and finishing no later than 5.30pm.

Some of our musicians will be performing next Friday evening (September 9) at the Jugglers Art Space in Fortitude Valley at one of the “Paint It Red” chamber music series.    Paint it Red is a collaborative music and visual art event series held at Jugglers Art Space in Fortitude Valley, Brisbane.    Paint it Red began in 2013, a project that the organisation’s co-artistic director Molly Collier-Boyle says “stemmed from a need for more chamber music and small ensemble performance opportunities in Brisbane as well as an in interest in trying to merge both music and visual art under one umbrella”.      Our musicians will be playing a short set of music by Dutch trumpeter, Eric Vloeimans.    More details about this performance are available here: www.paintitredmusic.com

Over the past two terms the Music Captains have been hard at work creating a new event for the whole St Paul’s community. We’re super excited to announce that a new competition called ‘SPS Fest’ (which now replaces Battle of the Bands) will be held on the second Friday of Term 4. SPS Fest is a music festival for everyone. There will be music, food trucks and a great evening festival vibe hosted on an outdoor stage here at St Paul’s. Anyone is welcome to make a band or perform solo, you don’t have to be a music student.

There will be a cash prize for the winning group, plus your names will be engraved on the SPS Fest trophy.