Today I am continuing our Easter theme and sharing a passage that picks up from where I finished last week.

If you recall, we ended the reading with Mary Magdalene and another women also called Mary meeting the resurrected Jesus at the tomb and running off in fear and awe to share their experience with other disciples.

Today’s reading from Luke is a classic Easter reading of two disheartened followers of Jesus returning home from Jerusalem to the small village of Emmaus at the end of the same day as the women’s account we heard last week.

A reading from the Gospel of Luke

Now on that same day two of them were going to a village called Emmaus, about seven miles from Jerusalem, and talking with each other about all these things that had happened. While they were talking and discussing, Jesus himself came near and went with them, but their eyes were kept from recognizing him. And he said to them, “What are you discussing with each other while you walk along?”

They stood still, looking sad. Then one of them, whose name was Cleopas, answered him, “Are you the only stranger in Jerusalem who does not know the things that have taken place there in these days?”

He asked them, “What things?” They replied, “The things about Jesus of Nazareth, who was a prophet mighty in deed and word before God and all the people, and how our chief priests and leaders handed him over to be condemned to death and crucified him. But we had hoped that he was the one to redeem Israel. Moreover, some women of our group astounded us. They were at the tomb early this morning, and when they did not find his body there, they came back and told us that they had indeed seen a vision of angels who said that he was alive.

Some of those who were with us went to the tomb and found it just as the women had said; but they did not see him.” Then he said to them, “Oh, how foolish you are, and how slow of heart to believe all that the prophets have declared! Was it not necessary that the Messiah should suffer these things and then enter into his glory?” Then beginning with Moses and all the prophets, he interpreted to them the things about himself in all the scriptures.

As they came near the village to which they were going, he walked ahead as if he were going on. But they urged him strongly, saying, “Stay with us, because it is almost evening and the day is now nearly over.” So he went in to stay with them.

When he was at the table with them, he took bread, blessed and broke it, and gave it to them. Then their eyes were opened, and they recognized him; and he vanished from their sight. They said to each other, “Were not our hearts burning within us while he was talking to us on the road, while he was opening the scriptures to us?”

That same hour they got up and returned to Jerusalem; and they found the eleven and their companions gathered together. They were saying, “The Lord has risen indeed, and he has appeared to Simon!” Then they told what had happened on the road, and how he had been made known to them in the breaking of the bread. – Luke 24:13-35

The question is often asked: was Jesus’ resurrection just the rebreathing of his concepts and ideals into the lives of his followers after his death? Or was Jesus physically alive and continuing his ministry in the world after the crucifixion?

Clearly the disciples and his other followers believed it was more than just an ideal as they encountered the living breathing Jesus as flesh and blood in the world.  The disciple’s road to Emmaus experience makes this explicit in their meeting of Jesus on the road as a person who walked and talked with them. It is reinforced in his acceptance of their hospitality and entering their home and confirmed in his actions of taking bread and breaking it in their presence.

There are those who would argue the resurrection of Jesus was just a spiritual experience but for Christians it must be more than that for Jesus to be alive today.

St Paul said: if Jesus did not rise from the dead then all we have done and all we do is foolishness.

Like many Christians I believe Jesus is risen and still alive today. I know the resurrection is real and without it Jesus would have been just another holy, wise, healer, teacher and prophet; an ordinary mortal man. With it He is revealed for who he is; God’s Son and our saviour.

Just as Jesus walked with the followers on that dusty road when all seemed lost to them, I believe he wants to walk beside each of us as we walk life’s journey. Jesus wants our eyes to be opened and each of us to come to know him.

On the road to Emmaus, two sad and frightened disciples met the risen Jesus. At first they do not recognise him, but as they opened their hearts in faith – to the scriptures, to community and the breaking of the bread – Jesus is revealed!

Their sadness is transformed into Easter joy. The same joy we are all invited to know when we believe that Christ is Risen and choose to live our lives with him as our Lord and saviour. Christ is Risen: He is Risen indeed. Halleluiah.

I pray as you continue to travel this Easter journey in whatever environment or situation you find yourself in that you are able to feel the presence of Christ in your life. That you are open to his word and that you can come to know the risen Lord Jesus as your friend, your companion and your Saviour. Amen. 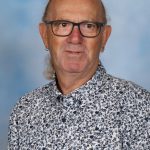 Photo by Ben White on Unsplash