I have a grandson, Luca. He’s 6 now, and a couple of years ago I began to teach him how to play checkers. He initially played with all the bravado, naivety and recklessness of a 4-year-old. He didn’t enjoy it when I took his pieces – he hadn’t seen that coming! And so, I began to teach him to be more cautious, to consider the consequences before he made a final decision to move a piece. We even developed a little signal that I would use when he was in danger: I would say – “Are you sure you want to do that?”

Luca learned quickly and now plays at least as well as me. He even asked me recently – “Grandad, are you sure you want to do that?” 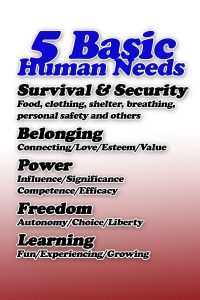 I have long believed that an understanding of Choices and Consequences is at the heart of the most successful behaviour management frameworks. I originally learned of this from the work of Dr William Glasser (1925-2013) – clinical psychologist & psychiatrist, who developed what became known as Choice Theory. Glasser suggested that all behaviour could be thought of as the effort individuals make to meet one or more of five basic needs.

Even as a young teacher, I could see how much sense this made in the context of my classroom, both in the lessons I planned, and the kind of teacher I strove to become. Students are much more likely to cooperate in a planned learning experience if the teacher has established a warm relationship with them (belonging), if they are given the opportunity to succeed (power), if they are given a say in what, how or with whom they learn (freedom) and if they have fun!

Glasser went on to propose that we should replace traditional extrinsic control psychology with more intrinsic rewards. He identified “7 Deadly Habits” that are associated with the worst forms of external control and suggested that we replace them with 7 Caring Habits:

I share these with you, not only because this is the approach that we tend to take at St Paul’s, but also because I believe parents may find some of these ideas effective in working with your children at home. Whether it applies in marriages or not I couldn’t possibly say!

Choices and Consequences is now the heading of a poster which hangs in every classroom at St Paul’s. The poster doesn’t just list a whole lot of rules, and it doesn’t just include the “Don’ts”. Good choices as well as poor ones are listed, together with their consequences. We are giving the students the choice (freedom) and we are supporting, encouraging, trusting and respecting their capacity to make good choices. However, the poster also provides an opportunity for teachers and tutors to point out to students, as often as it seems necessary, the consequences of continuing with a particular type of (negative) behaviour. They say to the students, in effect, “Are you sure you want to do that?”